The Drug, The Person, and The Place

The effect a drug will have on the user – positive or negative – depends on a variety of factors, but can broadly be summarised into three groups: The Drug, The Person, and the Place.

Various factors of the consumed drug will impact the effect on the user:

Various factors of the user will impact the effect of the drug when they use it:

The Place refers to external factors that can influence a person’s experience when using a drug. Examples of the place are:

Types of drugs and general effects

Having basic knowledge about drugs can help you make safer choices & know how to help a mate in need.

Broadly, drugs can be labelled into three types. Stimulants, Depressants and Hallucinogens. Some drugs can be multiple types. Labels are differentiated by the effects the drug have on the central nervous system as well as physical and phycological effects. The Drugs Wheel below breaks these categories down further. Stimulants are drugs that have a stimulating effect on the central nervous system. This means there are increased transmitters in the brain and from your brain to your body, making your body and mind more active.

Caring for someone under the influence of a stimulant

Serotonin syndrome is a potentially deadly condition that can occur after using some stimulant drugs- particularly MDMA.

Some signs and symptoms include (but are not exclusive or limited to):

Severe serotonin syndrome can be life-threatening. Severe signs and symptoms include:

Depressants are drugs that have a depressant effect on the central nervous system. They cause a decrease of electric signals in the brain and from your brain to your body, making your body more relaxed and lowering your consciousness.

Caring for someone under the influence of a depressant

Hallucinogens are drugs that have an interfering effect on the central nervous system. This means this class of drug interfered with the way electrical signals are transferred in the brain and from your brain to your body, causing changes in perception of reality and thinking.

Caring for someone under the influence of a hallucinogen/psychedelic

Polydrug use is when a person uses more than one type of drug, either at the same time or one after another in the same session.

Polydrug use occurs when a person:

Polydrug use can multiply the risks of individual substances. For example, combining depressants: Consuming GHB and alcohol together massively increases the risk of both.

Fatal overdose as the depressants work together to slow down both the heart and breathing rate and nonfatal overdose, which can result in permanent brain damage.

GHB & alcohol are particularly dangerous to combine as they use the same metabolic pathway. This means GHB can build up in your liver while the alcohol is processed, and then be released all at once in a dangerous overdose.

Other examples are using two stimulants together or using a stimulant and a depressant together.

A useful resource on drug combinations is https://combo.tripsit.me.

As a general rule dangerous combinations include:

You can do this by:

Disarming is to take the heat/risk out of a situation or conversation. To better approach a tense, agitated or aggressive patron, try to remember the following phrase:

T – Thanking someone for their confrontation

F – Finding some truth in criticism

A – Accepting more responsibility for a situation than you might deserve

Continue to remind yourself that this is nothing to do with you and everything to do with the person in front of you who has their own unresolved traumas and grief and anger.

Often a group situation can exacerbate tensions. It may be necessary for these situations to contact management via radio and/or seek support from other staff or care teams to keep friends and bystanders calm and as distanced from the patron as possible. Try not to draw unnecessary attention that can again make a situation quite performative.

What is sexual violence?

Sexual violence refers to any activity of a sexual nature that is unwelcome, unwanted or not consented to. Sexual violence is an umbrella term that includes sexual harassment, sexual assault and rape.

Sexual violence is not mutual or consensual interaction, flirtation or friendship.

Sexual violence can include but is not limited to, actions such as:

How common is sexual violence?

We know that sexual violence is extremely common in Australian society.

According to the Australian Bureau of Statistics, at least 1 in 5 women and 1 in 20 men will experience sexual violence in Australia across their lives. Sexual harassment is even more common, with over half of Australian women having experienced harassment.

People can also be targeted for sexual violence because of their gender, sexual orientation, race, and disability status. Sexual violence can co-occur with racist, homophobic, transphobic and ableist violence. Members of these groups often face a higher risk of experiencing sexual violence.

What do we know about sexual violence at music festivals?

Recent Australian research shows that sexual violence is likely to be very common at music festivals.

Behaviours such as unwanted touching and groping – especially in crowded areas – are frequently experienced by young people at music festivals.

While sexual violence can happen anywhere, some features of music festivals can make it easier for perpetrators to engage in this behaviour. For example, because festivals are often very crowded, it can be difficult for victims to identify their perpetrator.

Perpetrators can easily disappear into the crowd, and unwanted touching can be excused as ‘accidental’. Secluded and poorly-lit areas such as campsites can also be taken advantage of by perpetrators.

How are music festivals addressing these issues?

The AFA has Harm Reduction training available for festival organisers to provide staff, volunteers and patrons training. The AFA has also contributed to a new resource from the Pennington Institute that provides a toolkit for organisers to address these issues onsite.

Some festivals have implemented safe spaces at their festivals.

Ask for Angela is a campaign rolled out across many venues and is in operation at some festival bars.

What about drugs and alcohol?

Drug and alcohol use are common at music festivals.

Unfortunately, drugs and alcohol can also be used to facilitate sexual violence. For example, drink spiking with strong alcohol or other drugs is commonly used to incapacitate and take advantage of targets.

Drugs and alcohol can also be used by perpetrators to excuse their behaviour and to minimise responsibility for their actions with a common claim in such circumstances being that they didn’t realise what they were doing because they were “off their face”.

On the other hand, victims who have consumed alcohol or drugs are often blamed for their experience. This is a major reason behind incredibly low levels of reporting of sexual violence. Legally, a person who is intoxicated is considered incapable of giving consent to sex. Intoxication is not an excuse for a perpetrator’s actions – responsibility for sexual violence always lies with the perpetrator.

How to respond to disclosures

Most people who experience sexual violence do not report to authorities. In fact, 85% of victims never report their experience.

One reason for these low reporting rates is that victims often experience negative responses when they do report. For example, they might not be believed or taken seriously, or are blamed for their own experience.

Negative or inappropriate responses to the disclosure can amplify the harms of sexual violence.

Because of this, it is extremely important that you respond appropriately if someone reports an incident of sexual violence to you. Appropriate responses include:

It is never appropriate to:

Being an active bystander

Because the vast majority of victims do not report their experiences, it is important to recognise the role that you can play as an active bystander.

When acting as a bystander, your own safety is paramount. You should never intervene in a way that makes you feel unsafe or that escalates a situation.

Bystander intervention assumes that we all have a role to play in preventing and responding to sexual violence. However, many people are reluctant to intervene because they don’t think it’s their place, or because they are unsure of what to do.

What strategies can you use to intervene?

Try to remember the ‘5 D’s of intervention’, developed by the organisation Hollaback:

There is no one ‘best’ way to respond as a bystander – use the 5D’s like a toolbox to draw on if you need to intervene. Use whichever strategies you feel most comfortable and safe within the moment.

You can find more information on how to intervene as a bystander here: https://www.ihollaback.org/bystander-resources/

You can also consider taking part in training on bystander intervention:

Bystander training for people working in the music industry: https://www.cohealth.org.au/access-all-areas/#bystander-training

Bystander training for members of the general public: https://www.itsnotacompliment.com/bystander-intervention-training

The program allows patrons to ask staff at participating venues for a woman called Angela if they feel unsafe, with the code word meant to alert trained staff to discreetly escort the person to safety. If a patron asks for Angela, this means they are feeling unsafe, and need to be escorted to safety immediately. 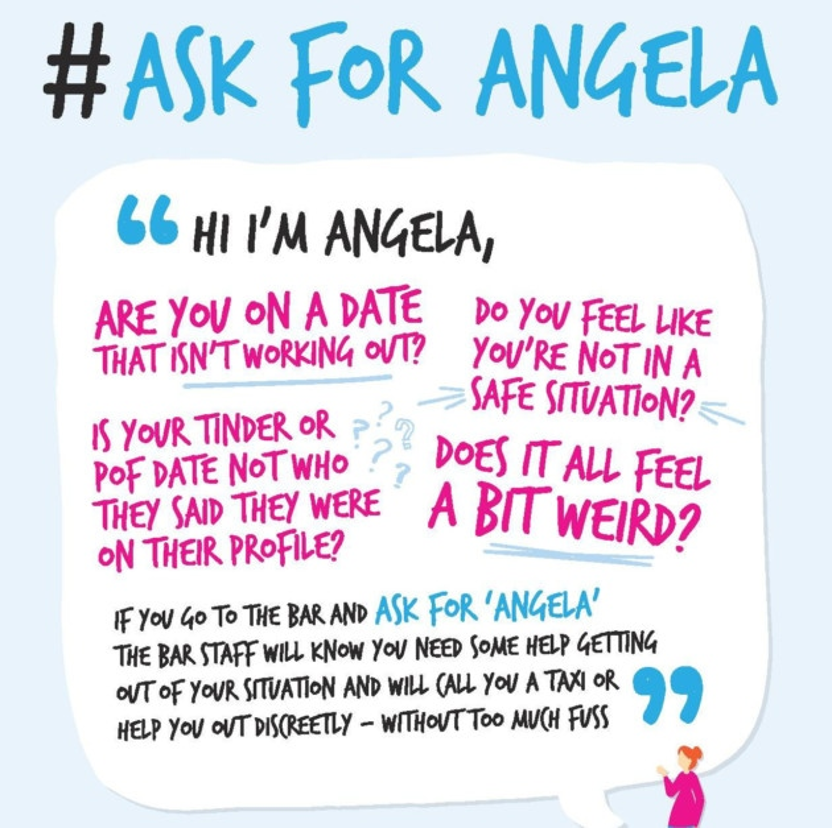 The AFA, in conjunction with our members, Dancewize, Red Cross save-a-mate and the ADF have developed Harm Reduction content and quiz. We are on a mission to ensure as many people at festivals understand some basic Harm Min concepts to ensure everyone remains safe. ​

AFA members are training staff, suppliers and security on their festival sites with this resource, as well as patrons in exchange for upgrades, discounts and presale access. Over 20,000 people have completed the quiz (as at 24/01/22).​

Anyone can try the quiz by clicking one of the two buttons below.

On behalf of all AFA members, we acknowledge the Traditional Aboriginal Owners of Country where we live, work and celebrate festivals. We pay our respect to their People, their Culture and their Elders past and present.

Respect and dignity are the rights of all people. We acknowledge with deep sorrow the dispossession, injustices and failure to respect and value the cultural beliefs of Aboriginal and Torres Strait Islander People, both in the past and continuing today.

Always was, always will be Aboriginal Land.